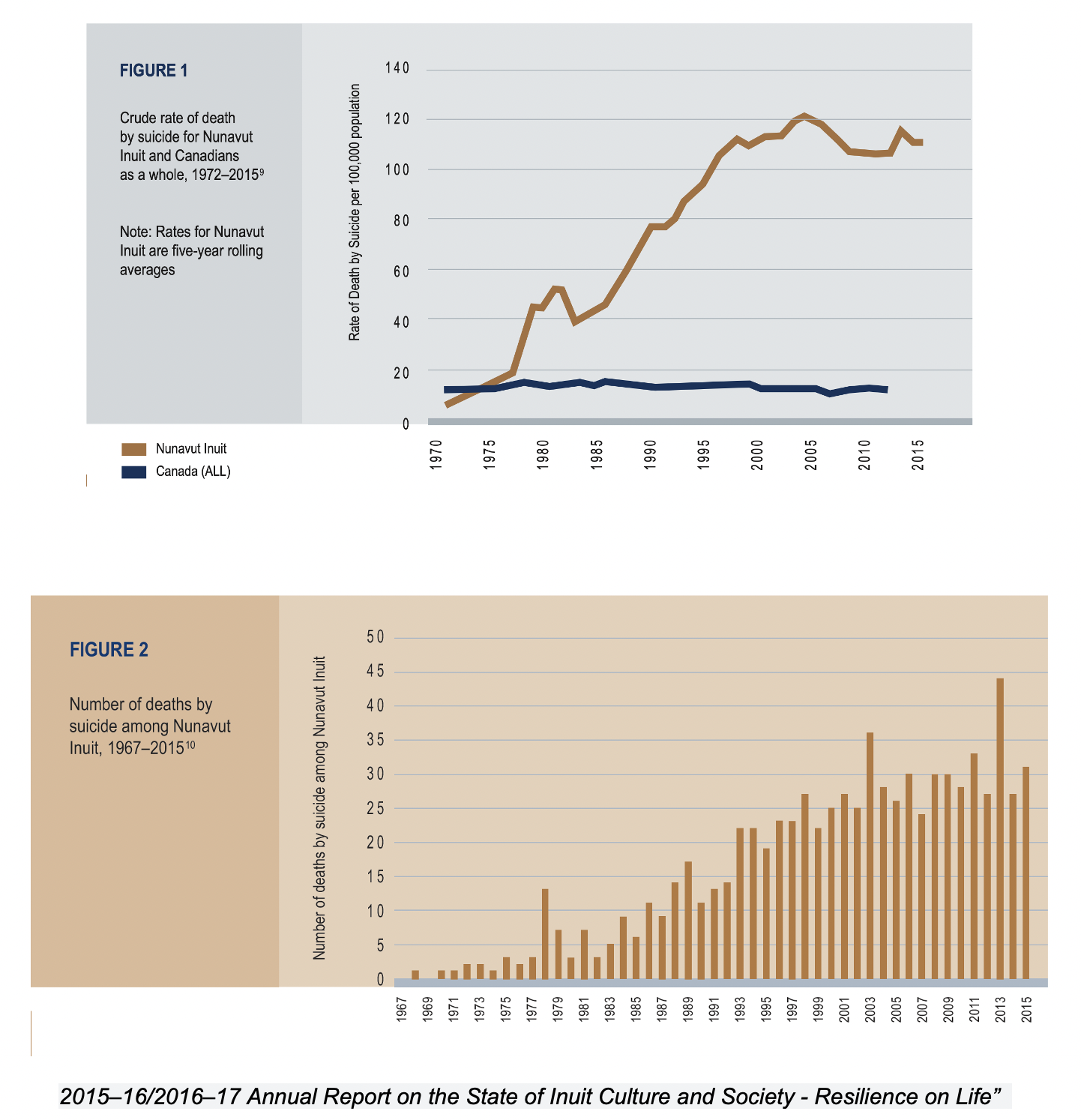 “Canada is one of the few developed countries that does not have a national suicide prevention strategy.” Resilience in Life. Executive Summary. January 2021

Aug. 31, 2022: The CRTC is implementing a new 9-8-8 number for mental health crisis and suicide prevention. The CRTC is requiring service providers to complete the transition to 10-digit local dialing in Nfld. & Labrador, Northern Ontario and Yellowknife area by May 31st, 2023. Once the transition is complete, service providers will have six months to make the necessary changes to their networks to enable callers to dial or text 9-8-8.

On Jan. 28, 2021 Nunavut Tunngavik Inc.’s (NTI) released “2015–16/2016–17 Annual Report on the State of Inuit Culture and Society – Resilience on Life” that focuses on pathways to reducing suicide among Nunavut Inuit. Suicide is the second leading cause of death in the territory and remains the most urgent challenge facing Nunavummiut. It is a symptom of wider social and economic inequities that cause distress among too many Nunavut Inuit. This report provides clarity about the causes of suicide risk and explores solutions for reducing suicide through Inuit-specific, evidence-based policy approaches.

“Some of our youth grow up believing that suicide is part of our culture. It is not. It is a symptom of colonization and on-going social and economic inequities that cause distress among too many Nunavut Inuit. Resilience in Life outlines a path forward to wellness based on Inuit-specific, evidence-based policy approaches”, said Eetoolook

The SICS report recommends that governments aim to create social equity among Nunavut Inuit by implementing Article 32 of the Nunavut Agreement to address persistent gaps in areas such as housing, formal education, food security, and health care. NTI encourages the Government of Nunavut and the Government of Canada take heed to recommendations in the report.  The recommendations will require collaboration, resource sharing and thinking about broad approaches to our shared goal.

Atii Angutiit brings men together for activities with the aim of suicide prevention Men paint pieces of a qamutiik at one of the Atii Angutiit…...

No Child Left Behind

NationTalk: FREDERICTON (GNB) – Child, Youth, and Seniors’ Advocate Kelly Lamrock has found that although New Brunswick has increased the funding and training for mental…...

No Child Left Behind

Resilience in Life: 2015-17 Annual Report on the State of Inuit Culture and Society

SSH...Listen, We Have Something to Say! Youth Voices from the North