The number one issue in Child Welfare is the overrepresentation of Indigenous children in care.

The majority of Indigenous children-in-care are First Nations (69.1%) 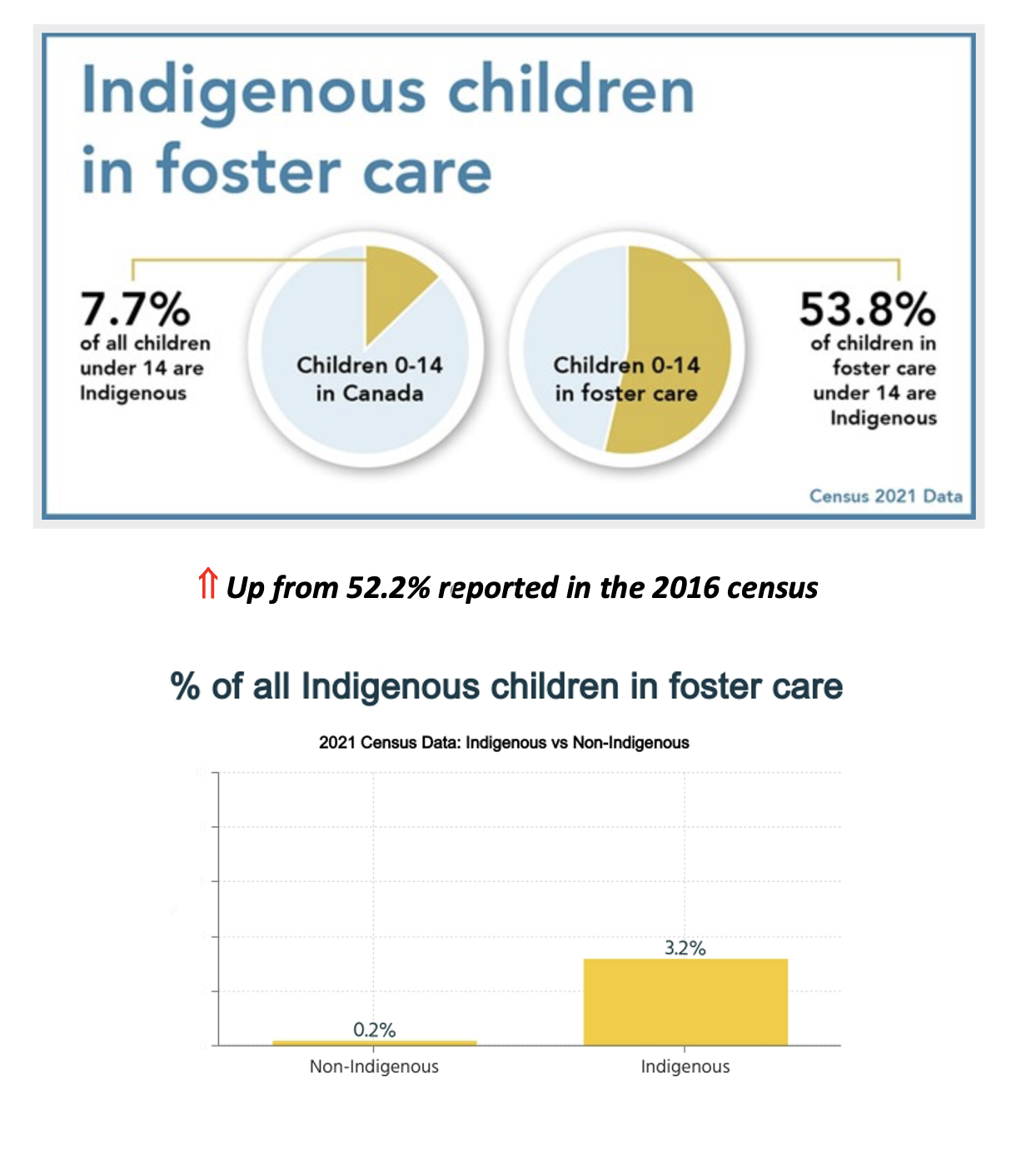 Indigenous children accounted for more than half of all children in foster care, at 53.8 per cent, despite representing only 7.7 per cent of children 14 and under in Canada.

Progress on reducing the overrepresentation of Indigenous children in care can be viewed through three distinct lenses: Federal, Provincial and the Candian Human Rights Tribunal.

Feb. 10, 2022: The Court of Appeal of Québec ruled that Bill C-92 “is constitutional, except for ss. 21 and 22(3), which are not”. These sections deal with the right of Aboriginal self-government and the regulation of Child and Family Services. As Mary Ellen Turpel-Lafond, professor of law at the Peter Allard School of Law at the University of British Columbia says,” “The only kind of law that would be allowed under this decision is one that’s clearly subordinate to the provincial law…It’s a bit of a slam dunk for The Indian Act.

The Quebec Government launched a legal challenge in Quebec Court of Appeal on Dec. 19, 2019 to assess the constitutionality of Bill C-92: “An Act Respecting First Nations, Métis and Inuit Children, Youth and Families”.

April 4, 2022 – University of Ottawa to conduct an independent review of Indigenous Services Canada “to identify ways it discriminates against First Nations children”. The review is part of the two Agreements-in-Principle reached with the federal government.

0/5 CTAs have been completed to date

Commit to reducing the number of Aboriginal children in care

AFN Will Continue To Fight For First Nations Jurisdiction As Affirmed In An Act Respecting First Nations, Inuit And Métis Children, Youth And Families

NationTalk: (Ottawa, ON) – The Assembly of First Nations (AFN) announced today that it continues to stand with First Nations in Quebec and all First…...

In the days after her son disappeared, Samantha Chalifoux said she knocked on doors and windows of the British Columbia group home where he was…...

SUMMARY:   On November 23, 2022, the Assembly of First Nations (AFN) filed an application for judicial review of the recent Canadian Human Rights Tribunal’s (CHRT)…...

Some leaders have high expectations for advocate from Sapotaweyak Cree Nation Sherry Gott (right) of Sapotaweyak First Nation is Manitoba's new Advocate for Children and…...

In the following post, my colleague Kate Gunn provides an overview of Quebec's challenge of Bill C-92 at the Supreme Court and what it means…...

The Canadian Council of Child and Youth Advocates (CCCYA) is an association of children's advocates from across Canada who have mandates to advance the rights of children and youth and to promote their voice. Although the names of the offices and their legislative mandates vary, the advocates are all independent officers of the legislature in their respective jurisdictions. Through the Council, they identify areas of mutual concern, and work to develop ways to address issues at a national level.

Check out the following sections for additional information relating to other 'Legacy" Calls to Action.