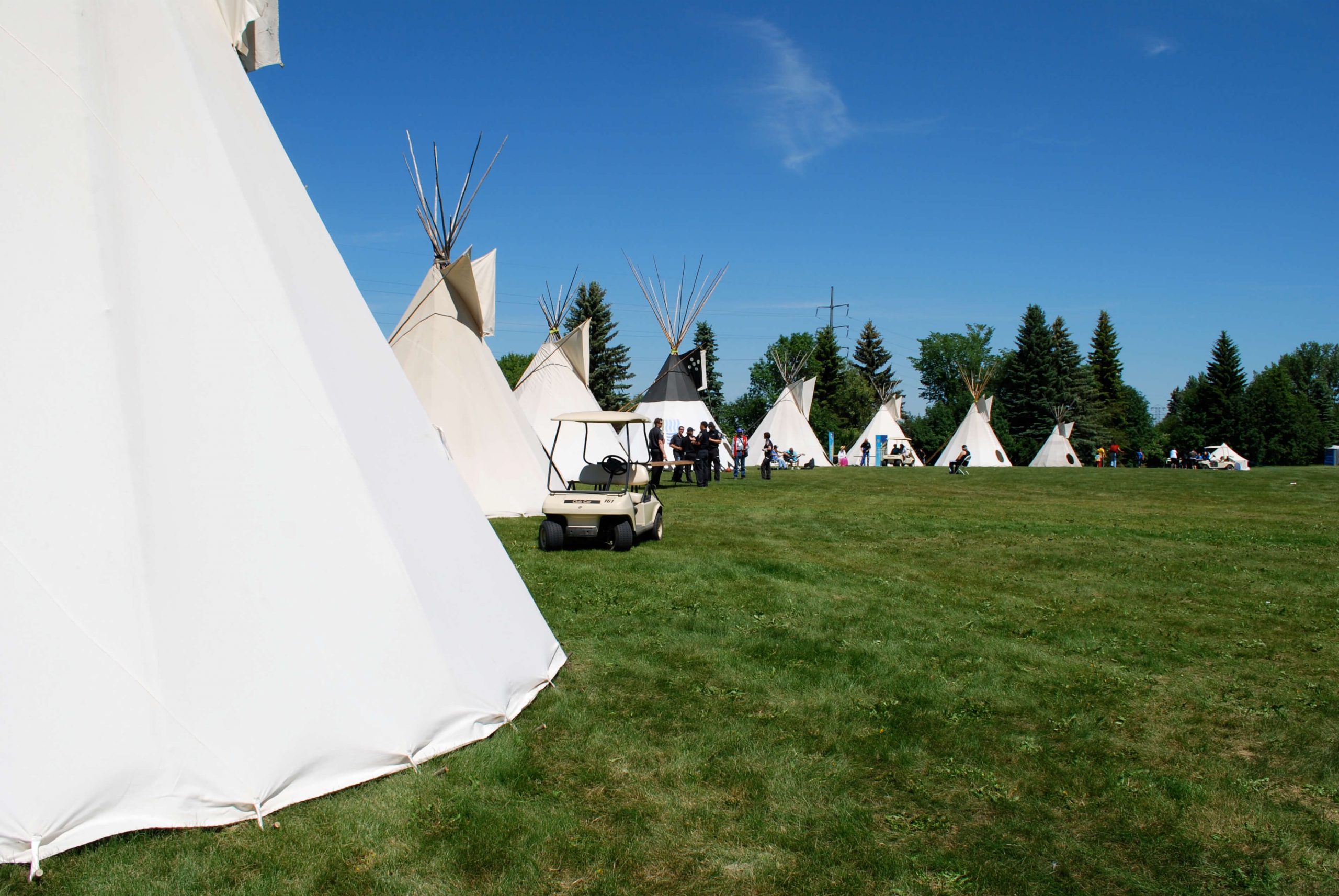 A row of the Tipi Village at the Saskatchewan National Event

Sept. 22, 2022: The 2021 census finds about 17.1 per cent of Indigenous people live in crowded homes, and 16.4 per cent live in homes in need of major repairs with the worst conditions on the prairies. Manitoba had 36 per cent of its First Nations population living in crowded housing, with 29 per cent in housing in need of serious repairs. In Saskatchewan, the figure came in at 34 per cent and 25 per cent.

Other facts (not from the census):

Throughout their traditional homelands, Inuit face an acute housing crisis which threatens their health and safety. This persistent and growing housing shortage has been characterized as one of the most significant public health emergencies in this country. Severe overcrowding, substandard homes, and a lack of affordable and suitable housing options has left many Inuit families one step away from homelessness; an unsettling reality in one of the harshest climates in the world. In Nunavik alone, over half of Inuit families live in overcrowded housing. In far too many communities, up to 15 people, including young children, live in small and crumbling three bedroom units. The effect of these conditions, on children in particular, is deeply troubling. Overcrowding results in higher levels of domestic violence and abuse, placing children in unacceptably vulnerable situations.

The lack of decent and affordable housing continues to have serious public health repercussions throughout the Inuit territories. Tuberculosis, which is rare in southern Canada, occurs among Inuit at a rate over 250 times higher than for non-Indigenous Canadians. Inuit families are at higher risk for mental health problems, including stress and anxiety. High levels of respiratory infections among Inuit children, such as chronic lung disease after lower respiratory tract infections, are also linked to crowding and poorly ventilated homes.

“We can do better: Housing in Inuit Nunangat”. Report of the Standing Senate Committee on Aboriginal Peoples, 2017

The substandard and deplorable housing conditions in First Nations are a persistent and growing phenomenon. Current housing programs do not meet the increasing demand of new housing units brought on by the higher than average population growth, overcrowding, and deteriorating units as a result of poor construction and impacts from mold. Between 2010 and 2031, it is estimated that there will be a backlog of 130,000 units, 44% of the existing units will require major repairs and 18% will require replacement.

Toronto Star: From a family living for seven years in a condemned home that was meant to be temporary to people with disabilities having to…...

NationTalk: The Provincial Government is working with community partners, stakeholders and Indigenous Governments and Organizations to address the needs of vulnerable populations and to ensure…...

Crown-Indigenous Relations and Northern Affairs Canada: The Government of Canada is working to reduce social and economic inequities between Indigenous and non-Indigenous communities by making…...

Canadian Housing and Renewal Association (CHRA) CHRA’s Blueprint for Housing is an in-depth policy document that will help inform CHRA’s advocacy efforts over the coming decade as…...

TIMMINS, ON: Nishnawbe Aski Nation (NAN) will seek support from the governments of Canada and Ontario for a new First Nation-designed strategy endorsed by Chiefs-in-Assembly…...

The effects of the housing shortage on Indigenous People in Canada

Report of the Standing Committee on Indigenous and Northern Affairs APTN: Indigenous Services Canada is on track to miss its 2030 target to close the…...