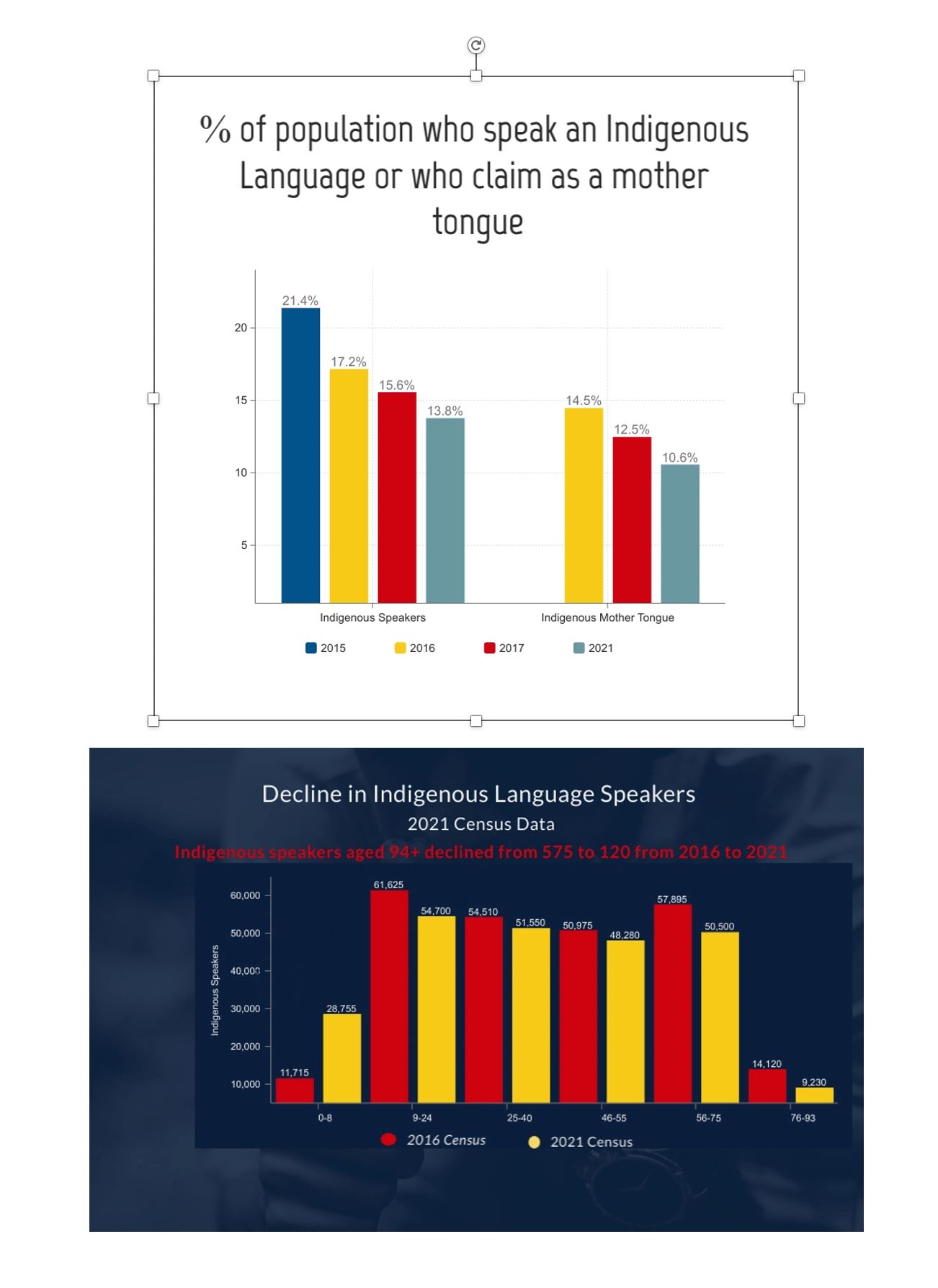 May 13, 2022: CBC – First Nations in Québec call Bill 96 “An Act respecting French, the official and common language of Québec” cultural genocide with its legal dictates increasing the threats to the survival of Indigenous languages.

Jan. 12. 2022: Toronto Star – 2022 marks the beginning of an international decade of Indigenous languages in which Canada is to play a key role. The United Nations Educational, Scientific and Cultural Organization (UNESCO) drive to revive and protect Indigenous languages will include initiatives to protect endangered tongues such as Michif, the Métis language. Canada is to represent North America and western Europe on a UNESCO task force which includes three Inuit, First Nation and Métis representatives. All three said they wanted to make Indigenous languages more widely spoken in Canada, with measures to ensure they are also taught in schools. The Inuit representative on the UNESCO task force wants to make Inuktuk an official language alongside English and French…Around 70% of Nunavut’s population speaks Inuktuk and it is recognized as an official language in the territory, But most children are taught in English

Sept. 5, 2019: The Governments of Canada and Nunavut, and Nunavut Tunngavik Inc. are collaborating toward an agreement that will support, revitalize and strengthen Inuktut in Nunavut with up to $42M over 3-year period to support this work.

June 21, 2019 Bill C-91 “An Act Respecting Indigenous Languages” received Royal Assent. The AFN and the Métis National Council support the bill but the Inuit Tapariit Kanatami, the national advocacy voice for Canada’s Inuit did not. ITK did not see many of their recommendations incorporated into the languages Act, thereby leaving Inuktuk, their “national” language, with less protection than English of French in their own territory.

2/5 CTAs have been completed to date

Artisans and trappers from the Northwest Territories say using fur is humane and sustainable Fashion designer Taalrumiq uses TikTok to share her Inuvialuit culture and…...

What would a $20 bill look like if it had an Indigenous woman front and centre?

Stoney Nakoda elder Winnfred Beaver scans through a new textbook of the Stoney language aimed at preserving the Indigenous language at a ceremony in Kananaskis,…...

Ottawa’s Sir John A. Macdonald Parkway to get an Indigenous name

A sign displaying the name of the Sir John A. Macdonald Parkway is pictured as vehicles pass in Ottawa on Jan. 19, 2023SEAN KILPATRICK/THE CANADIAN…...

Dances offer something to look forward to in the winter Guests dance at the local Kahomni, Gahomni in Dakota, on Standing Buffalo Dakota Nation in…...

Ribbon skirts are often worn in ceremonies or special events, but can be for everyday use Louise Jocko and Autumn Lewis, wearing ribbon skirts in…...

NationTalk: Indigenous Tourism Ontario is pleased to announce the establishment of the Indigenous Cultural Integrity Advisory Committee to support the respectful growth of Indigenous tourism…...

Current Problems with
Language and Culture (13-17)