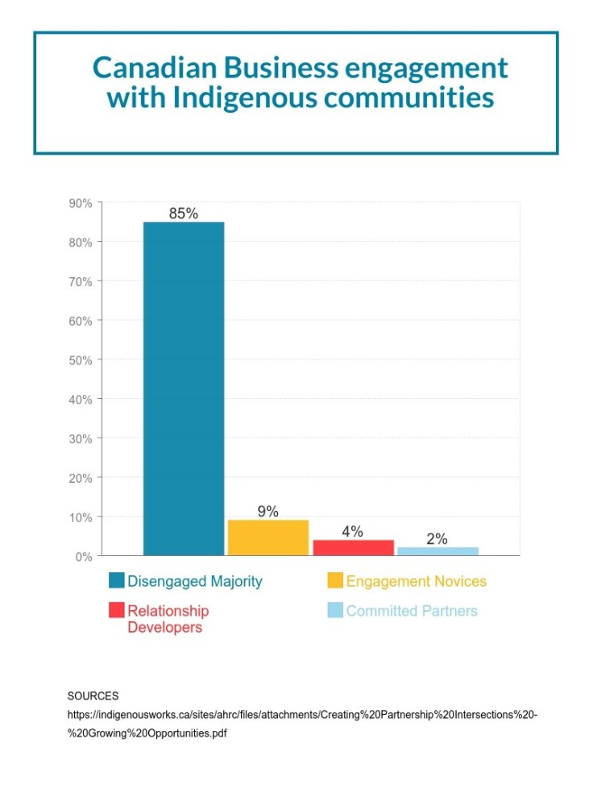 Business Council of Canada, the Canadian Chamber of Commerce, Conference Board of Canada, Canadian Council for Public-Private Partnerships (CCPPP) and numerous business associations have all made recommendations or commitments aligned with C2A 92. Very little follow-up activity though especially in response to the number of Indigenous protests across the country in relation to Free, Prior and Informed Consent, Duty to Consult, environmental impacts etc.

“85 percent of Canadian businesses are in no way engaged with Indigenous communities.” A new report commissioned by Indigenous Works and prepared by R.A. Malatest & Associates Ltd.

New research suggests that more than five in six Canadian businesses are completely disengaged with Canada’s indigenous peoples. The opportunity now is to view this metric as an incentive to partner with a committed and fast-growing community that has much to offer. By engaging with Indigenous communities, Canadian businesses can realize a host of important immediate and long-term benefits:

June 6, 2022: “National Indigenous Economic Strategy: Pathways to Socioeconomic Parity for Indigenous Peoples” identifies 107 Calls to Economic Prosperity across 4 strategic pathways: People, Lands, Infrastructure and Finance – that taken together will eliminate barriers to the full participation of Indigenous people in the Canadian economy.

0/1 CTAs have been completed to date

New program will be created in collaboration with TD Bank Group and the Canada Infrastructure Bank   NationTalk: OTTAWA, ON – AFOA Canada has collaborated with…...

Canadian Council for Aboriginal Business: As part of its 40th annual Ontario Business Achievement Awards (OBAAs), the Ontario Chamber of Commerce (OCC) is proud to announce…...

AFNQL: First Nations Do Not Want A Superminister of The Economy

NationTalk: Wendake, October 18, 2022 – The Assembly of First Nations Quebec-Labrador (AFNQL) does not look favorably on the possibility of Premier François Legault appointing…...

NationTalk: (xʷməθkʷəy̓əm (Musqueam), Sḵwx̱wú7mesh (Squamish) and səlilwətaɬ (Tsleil-Waututh)/Vancouver, B.C.) The application to the Court for judicial review by the Kits Point Residents Association asking for…...

Historic Partnership Between Sḵwx̱wú7mesh Úxwumixw and Canada to Create Nearly 3,000 Homes in Vancouver

NationTalk: Westbank, British Columbia - The First Nations Finance Authority (FNFA) has signed a memorandum of understanding with BFL CANADA, one of the largest employee-owned and…...

On a sunny day last month, a group of about 30 people toured the Nanticoke Solar facility, a 44-megawatt project built on the former site…...

Current Problems with
Business and Reconciliation (92)